The greatest enigma in the history of art solved through total psychology?

Who does not know the Garden of Delights of Jerome Bosch! This is one of the works that has fascinated all art lovers for over five centuries. Everyone feels that it contains an important message concerning love and sexuality lived in the respect of natural laws, but no one seems to have been able to decipher it. Many specialists have tried it, and cat finally got their tongue. 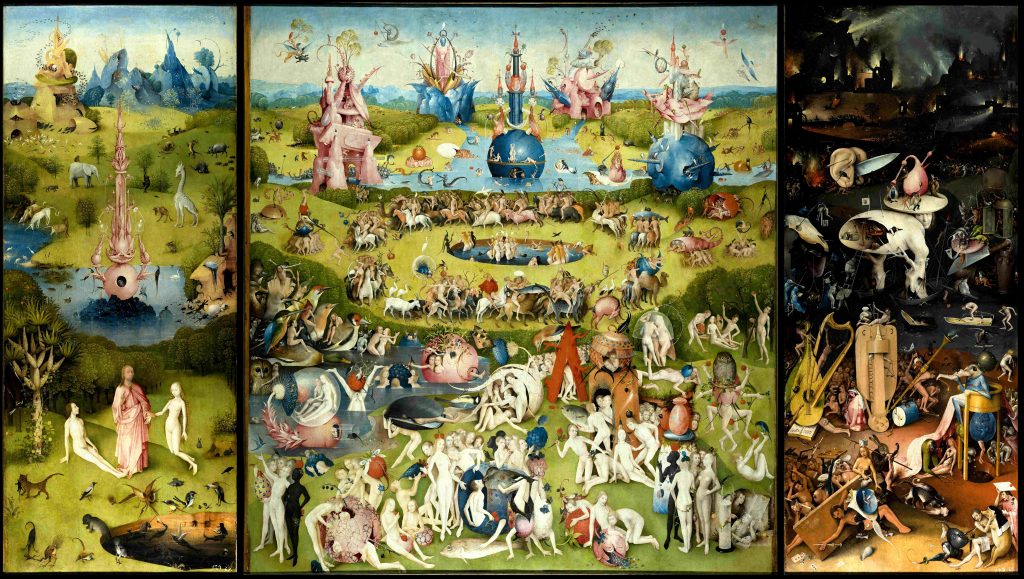 Claude Mettra, a chronicler at France-Culture, wrote in the preface to an important book devoted to this triptych (1977): “What is proposed here is an absolute masterpiece since no rational reading, no symbolic interpretation, no historical reference can account for it. (…) It is in this sense that it should be said at first that the picture of Jerome Bosch means nothing, or no more than a face, no more than a field of snow under the red sun of winter, no more than a parched bark in a desert forest … ”

Since then, nothing progressed. The latest film by José Luis Lopez-Linares “The Mystery of Jérôme Bosch” is a most blatant evidence of that statement. We always consider the Flemish painter as a “devils’ maker”, and remain open-mouthed in front of his impenetrable symbolism.

Yet, in the 1930s, Wilhelm Fraenger, a historian and professor of art history in Berlin, accidentally put his hand on the minutes of a trial of the Inquisition: members of a group of the Free Spirit , accused of carnal sin, asserted before their judges that they had acted in the name of an “Adamite” love which, according to them, prevailed until the Fall. The sexual relations with which they were accused, different from ordinary relations, would have brought them a knowledge of a spiritual nature, superior to any scholarly knowledge one can learn in books. They were condemned to the stake in 1411.

Fraenger hypothesized that Jerome Bosch might have been commissioned by these heretics to immortalize their teaching in coded form. He then attempted to decipher the boschian symbolism by relying on their statements. His interpretation, probably closer to the painter’s intentions, did not have the echo it deserved, probably because it appealed to concepts that were difficult to accept in the very reductionist context of the early twentieth century. Also because it undoubtly contained a certain number of aberrations and obscure points which disqualified it.

Faced with such a disappointing assessment, the bet was open for evolutionary ecopsychology to attack in turn this great enigma. It was not a question of going into great historical or esoteric speculation, but of establishing the link between the different symbols used by Bosch and the concrete facts. Scientific approach shall be based on verifiable and reproducible phenomena. This is precisely the case of the theory of metasexuality, whose starting point is the observation of a double function of erotic impulses. Many observations have shown that two sexual functions must be distinguished, one biological in nature and intended for breeding and the species’ continuation, the other specifically human, meant to develop extrasensory abilities.

looks at us modestly in the eyes to draw our attention to the lesson, her partner presents a giant blackberry to a group of hungry mouths.T

hrough a triangular indentation, one sees a couple emanating serenity and innocence. The young woman looks at us modestly in the eyes to draw our attention to the lesson, her partner presents a giant blackberry to a group of hungry mouths.

Between the blackberry and the amniotic pouch, the Y-shaped legs of an overturned man shows us that free will allows us to choose between two possible way of love :procreation, and a subtler form of Eros able to generate a higher energy (the blueberry), capable of feeding the souls in need of food.

Bosch adds one more detail: a leg, left unnoticed by any expert, protrude from the peach. A third person is hidden next to the couple, just as three people are reunited in the thistle, while in the mussel, one recognizes unequivocally two lovers. The two forms of love would differ in that one is a couple, whereas the other requires an opening of feelings towards the third. 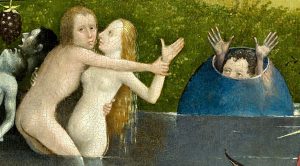 This delicate question is evoked just above the blackberry: next to a couple embodying the will to possess the woman, a third, to which refers the set of three open hands, drifts in a barrel: possessive love generates separation and suffering. The alert look of the main protagonist tells us the importance of the lesson. 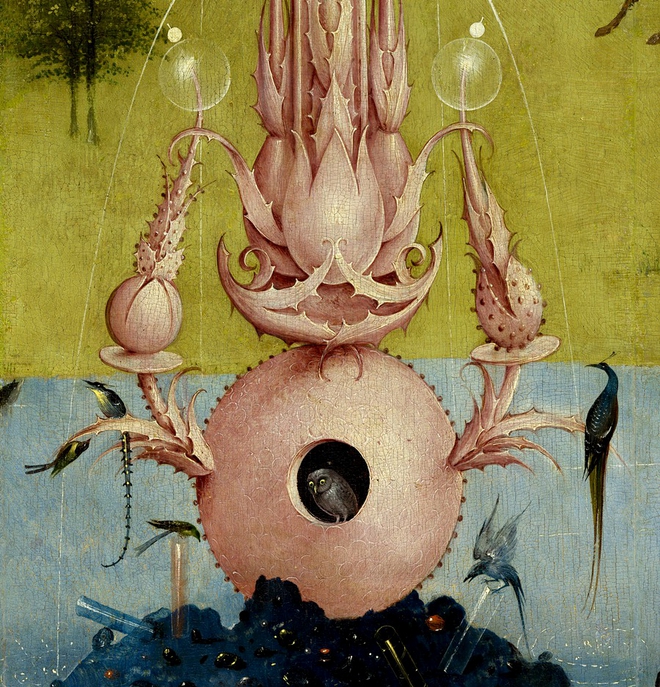 What then is the natural function of this love not devoted to procreation? The answer is in the exact center of the left panel: in the middle of Paradise, in a giant iris, an owl opens its large golden eyes. It is found in the central panel at the arrival point of a large equestrian procession evoking romantic relationships, clearly designated by the first rider. Its budding wings are still those of a young bird, hardly out of the egg. Knowing that the owl has the ability of night vision, it represents here the extrasensory faculties, the main of which is clairvoyance.
Bosch reveals to us that a certain form of love, obeying certain detailed rules in the different groups of horsemen, leads to the development of the paranormal faculties and, at the same time, that these play a central role in the human being’s destiny(the iris in the center of Paradise).

The giant fish, allegory of sex, translates the great question: “to what lead the powerful sexual impulses proper to the human being”. The main rules are listed in the groups that precede the owl. The red hood under which the only couple in the procession cavalcade represents the a-thinking as defined by tantrism. The giant egg evokes the difficult balance of consciousness between the mind and the transcendent dimension. The rider in ecstasy on the feline, abandonment to innocent enjoyment. The spherule, a higher energy feeding the souls, and the owl just emerged from the egg, the development of extrasensory faculties. 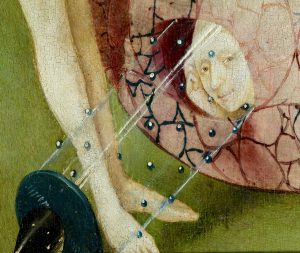 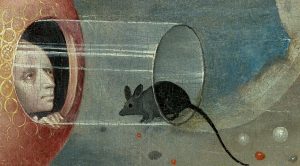 The groups of nudes in the foreground of the same panel, clearly erotic though radiating innocence, constitute a true initiation to the different types of relation belonging to the adamite Eros. Very significant are the two crystal tubes, one of which is penetrated by a rat (at the base of the floating pineapple) and the other is sealed by a lid (at the base of a vascularized squash, Angle lower left), excluding the penetration of this type of relations. This interpretation is in line with the writings of Plato, for whom there are also two Eros, one of which meant for reproduction, and the other for feeding “the wings of the soul”, allowing it to reach the Essences or Eternal truths. It also joins the unusual observations that the author describes in the autobiographical part of the book on the links between romantic relationships and the development of extrasensory faculties, the very medium of access to Archetypes. 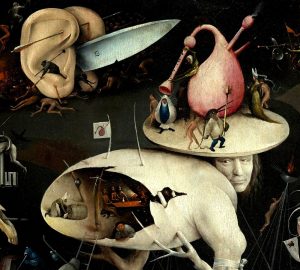 This interpretation is in line with the writings of Plato, for whom there are also two Eros, one of which meant for reproduction, and the other for feeding “the wings of the soul”, allowing it to reach the Essences or Eternal truths. It also joins the unusual observations that the author describes in the autobiographical part of the book on the links between romantic relationships and the development of extrasensory faculties, the very medium of access to Archetypes. 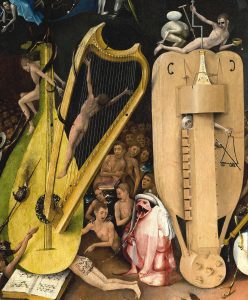 The organistrum represents the life of a couple: the man turns with difficulty the crank that passes at the level of his sex. The wife tried in vain to see him. She calls him with a triangle loaded with rings that can only emit frightening sounds.
The unfortunate Adam, overwhelmed by the weight of a giant bombard (evident phallic symbol) burning with a fuliginous fire, is finally devoured by the Devil. The owl of paradise has given place to a deadly avatar, a giant night-jar. From extrasensory faculties remain only destructive forces represented by this sinister bird, which rejects its prey through an enormous anal prolapse in the infernal waters, where the gourmand vomits his greediness and the miser shitting his pennies.
Eve is prisoner of a demon with a donkey’s head, a toad crawls between her breasts. She could only perceive from her sleep the reflection of her own eyes and those of the devil In a mirror placed on the siege of another demon, with the dried vegetable body: a picture of the vanity of his existence and of a sexuality empty of transcendent energy. 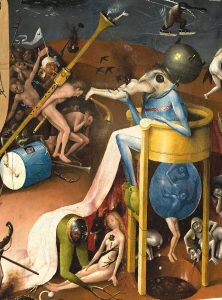 The whole triptych, as well as the triptychs made by Bosch at the same time, deserve a much more thorough analysis. If you are interested in the subject, please note that a book by Guy-Claude Burger has just been published, which aims to provide an interpretation both exhaustive and completely coherent of all the motifs and symbols of these inimitable works.
The detailed explanations given by the author are pleasantly read, each of them illustrated by the reproduction of the analyzed pictorial motif (a total of 362 extracts). All the significant details of the triptych find a perfectly coherent interpretation. This work reveals the feeling of a great revelation, masterfully depicted and encrypted by the genius of Bosch, and fundamental to the destiny of humanity. Remaining hermetic for five hundred years, one can only be surprised to see it so simply explained and made available to everyone.
The author proposes the following bet: in case you find a single point to be contradictory or without satisfactying explanation, you will be able to indicate it in the Contact page of the site, and if your objection does not receive a pertinent answer, you will be reimbursed in full the price of the book

The Garden of Earthly Delights by Jérôme Bosch: the Secret of the Future?
So go on our public Facebook group and and animate the discussions about the book !

To go further (one click = the text appears in a window, right click = you can open the text in a new tab):

How to find the entrance door (s) in the triptych?

Love and sexuality lived in compliance with natural laws